I have long been interested in the viability of visual programming languages (VPLs) for general purpose programming. VPLs tend to be domain specific, most often in hardware space. There has been a recent flurry of fresh activity in this old topic, so I want to make a fresh re-assessment.

Some of these inquires are direct proxies to "can net quality be improved" which is certainly a question I want to answer as well. However, I am interested in the minutia, the UX, the feeling, and both the literal and perceived sense of robustness when trading traditional programming languages for a VPL.

There are two VPLs that I think are currently worthy of evaluation:

Let us select node-red. node-red is a good candidate because it is under continuous active development, has extensive documentation, and seems to exhibit a sound balance of high capability with good UX. If you can the VPL wiki and read the many HackerNews threads, you can observe that few tools are actually mature enough for general purpose programming, let alone those which you would actively deploy into production.

Objective: write a program that reads a directory recursively, watches it, and continuously emits stats about the directory. Let's just include:

It turns out, node-red already offers a FS watcher out of the box, albeit less powerful. I was not aware! Nonetheless, here is the whole program:

It's a simple program, by design. Even so, wiring up a watcher and computing derived state from a stream of file-stat messages could be argued as non-trivial. The flow of this diagram does make this application look quite trivial, which is an interesting observation on its own.

The first node is an Inject node name init. I probably should have named this step emit-configuration. This node is immediately emits on program start. If we were writing an imperative program, this step would be implicit. Nonetheless, the setup that I author in the init step would be multi-line, and perhaps not so clearly grouped/encapsulated were it in, say, a bash program.

If I pop open the config, you'll see:

I have hard coded these values, but they certainly could have been read from config, a message, or the environment. These msg values are chokidar.watch params.

The init node sends a config message into a function node named setup-file-watcher. It would be interesting to write the file watcher from scratch, but x-platform filesystem watchers are known finicky to author.

The setup-file-watcher is somewhat interesting, as it demonstrates:

Let's jump into a few tabs in the setup-file-watcher node.

I need a few libraries. node-red makes importing and exposing them trivial. 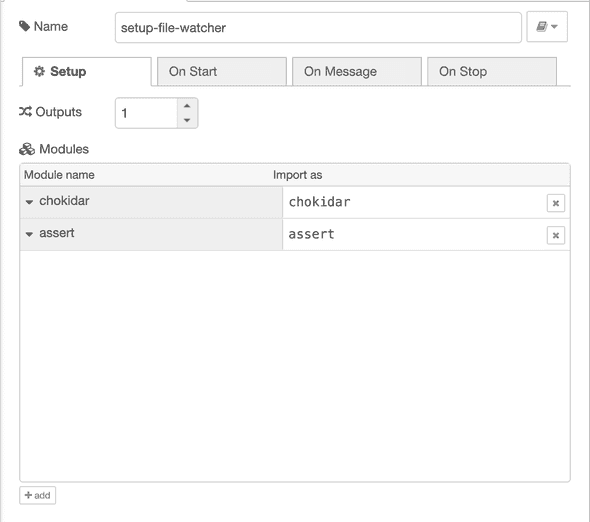 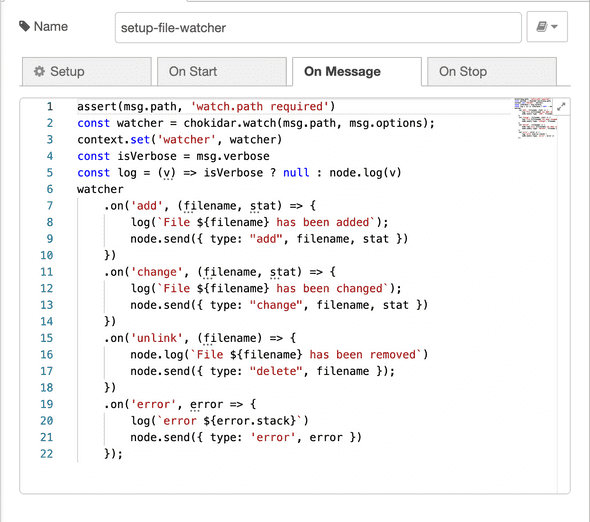 Next up, On Message. In the current state, I expect only one config message, thus setup a file watcher as a singleton for the node. However, this could be minimally tweaked to permit many file watchers created from many messages. I bind the file-watcher instance (chokidar instance) to events, mapping them back to the VPL via node.send(...) calls. This is great--I love the concept of node.send(...) invocations sending messages through the rest of my node-red flow. Additionally, I set some node level state, which allows me to clean up the memory and teardown the watcher when my program exits. 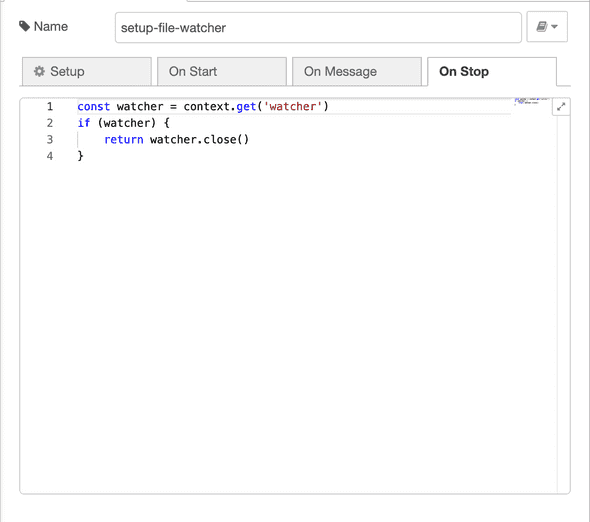 The final interesting part of the application is a compute-file-stats function node. Again, I use the function type node. This node: 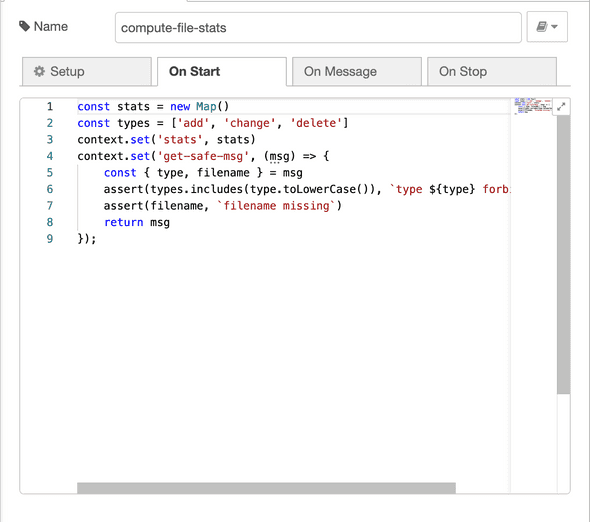 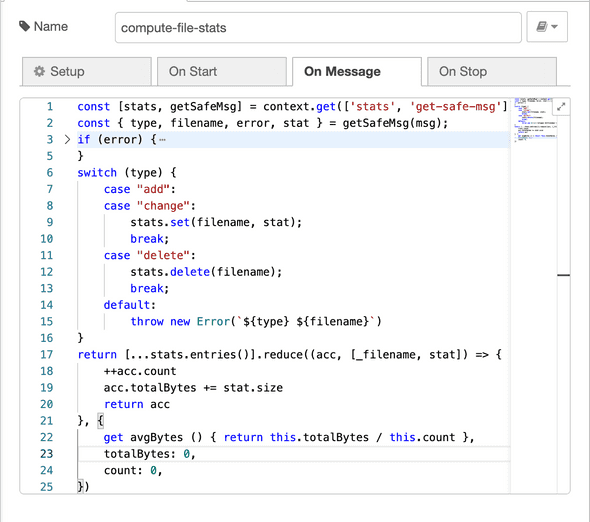 You may be thinking "that's a lot of JavaScript, not using VPL tools" to compute the file statistic message. You're right. Put a pin in that thought, and we'll come back.

Finally, we plumb the statistic message from the compute-file-stats node into a debug node, just so we can pretty print our messages somewhere.

From node-red, I can hit the Deploy button. Now, I can start adding, changing, and deleting files in my watched folder, and observe realtime outputs.

Revisiting the "not using VPL tools" discussion. We wrote our full stats reduction in JavaScript, versus using any VPL reduction primitives. node-red does not offer a great mechanism to actually do lower level data processing outside of JavaScript. Its strength is more in passing the datas along to macro processing units. Due to no support of multiple inputs, implementing a something as simple as a map-reduce with their VPL constructs is quite cumbersome. I created a successful proof of concept, and some of the community also pitched their ideas in on the node-red forum. So, it's achievable, but the complexity it adds may diminish its practical value.

Q: Can architecture be easier to learn or convey?

Absolutely. The visual nature of the design, and the ability to link in subflows are very powerful. Rather than jumping through flat files, the flow modularized the relevant code, field, and general data in logical, named buckets that had clear association with a step in the flow. The step in the flow was self evident by means of association with edges between nodes, as opposed to imported modules commonly used by popular programming languages.

Can contributions be made more safely to the application or library?

There is no visual-VCS tooling in this space at the moment. node-red collaborators would be studying diffs of JSON files, which is worse than studying code, as you are study serialized code, versus code itself. Furthermore, conflicts would be frequent in a team of multiple contributors working on the same segments of the application.

Can the testing UX be improved?

Maybe. The node-red forums have various users discussing this. There are no best-known-methods or patterns in place. However, some simple patterns could be thought up to make this a possibility. I'm quite confident that by practicing a few conventions around the application's configuration model and the way Inject nodes are used at the beginning of flows, an interesting and powerful integration testing mechanism could be blissfully developed. I halted exploring this deeply, due to lack of ability to execute map-reduce visually with elegance.

Can iteration speed or ease be improved?

What orthogonal threats/benefits are introduced?

Repeat the experiment in enso!